Prep for ASC Infection Prevention Certification: Distinguish Yourself as a Specialist 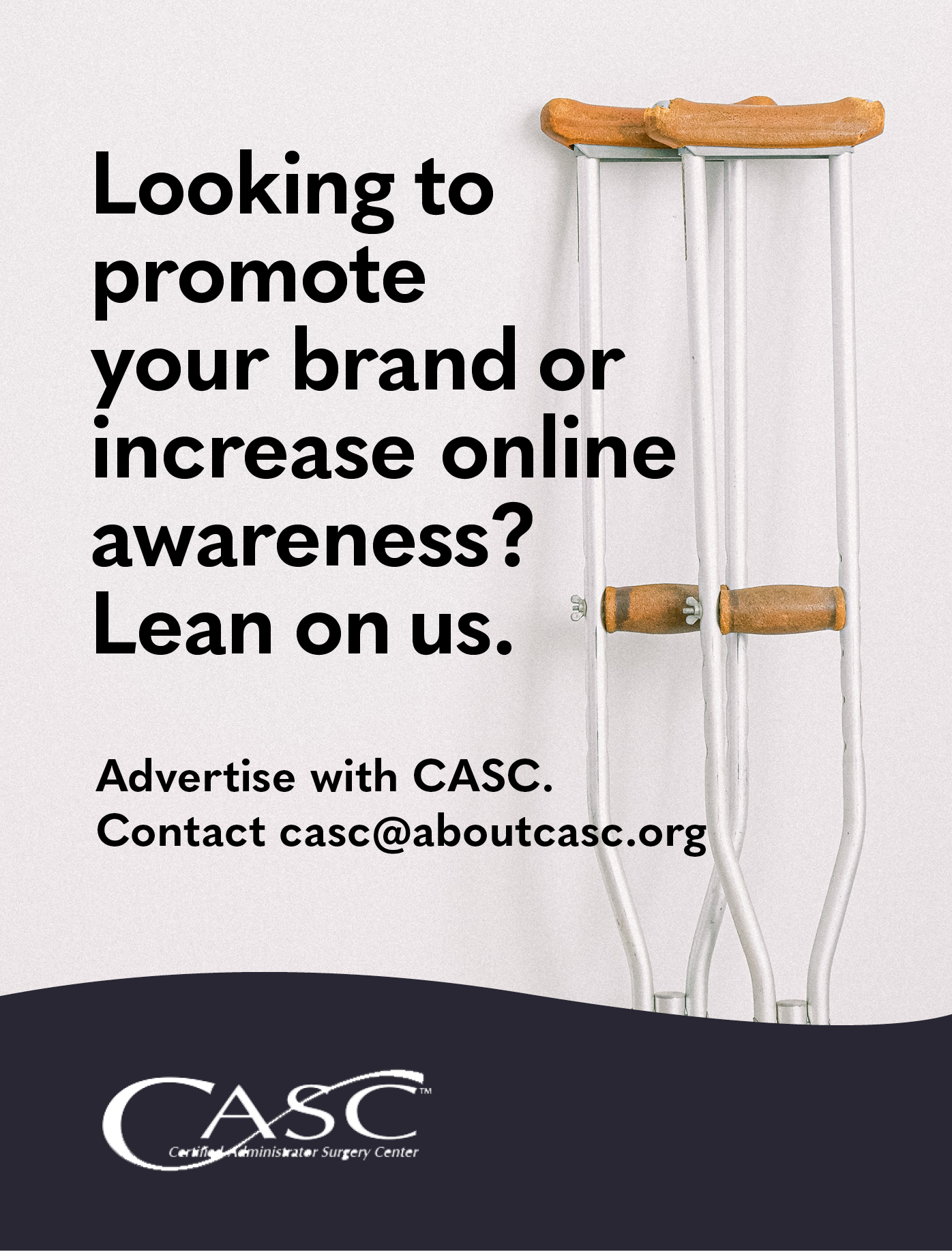 Take me to CASC

Take me to CAIP

Login to your member profile 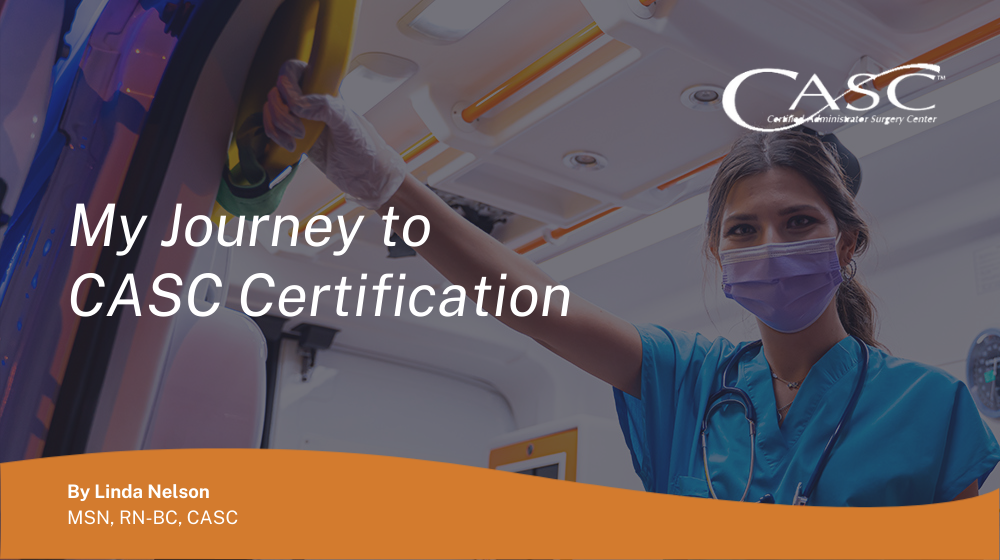 My journey to earning the Certified Administrator Surgery Center (CASC) credential began in 2016.  I first became aware of the CASC certification shortly after becoming a director of nursing in an ambulatory surgery center.  Prior to that, I had spent 20 years in the outpatient department of a hospital and was certified in ambulatory care.  I had found value in the process and took pride in being certified.  In 2016, I was in the process of finishing up my MSN in nursing leadership. While the idea of eventually pursuing CASC certification sounded exciting, it wasn’t practical at that time to take on the challenge. I put that goal on the back burner.

I learned quickly just how different working in a privately owned free-standing surgery center was.  While it allowed you some freedom from corporate red tape, it also took away many of the securities provided in the environment of a large company.  If a policy needed updating or changing, it was up to me to do the research, write the policy and educate the staff.  Not everyone buys into change easily. I found the best way to get buy-in was to be well educated on the reasoning behind the change.  I soaked up as much information from the journals, websites and educational offering of organizations such as APIC, SGN, ASCA and AORN.

While attending an ASCA conference, I learned more about the CASC certification.   At first, I thought maybe I wouldn’t be able to conquer the business knowledge needed as my current role was mainly clinical.   There was very little cross-over between my role as DON and the administrator’s role (non-clinical).  I also worried that my pursuing the CASC certification could be seen as encroaching on the administrator’s territory.

I didn’t think further about the CASC certification until I became aware of the CASC prep course, presented by ASCA.  I thought this might be a great way to be introduced to all the areas of running an ASC, as well as get some CEUS.  I felt strongly enough about attending the course that I paid my own airfare and took the course with our administrator’s approval.

The conference was very informative, but a lot of the material was still new to me.  Several of the other attendees were signed up to take the test the next month.  I knew that I was nowhere near that point.  Still, I soaked up all I could and took copious notes.  The conference was great, but in no way would it be comprehensive enough for me to get through the test without additional preparation and work experience.  The areas that I felt needed the most work were finance and regulatory/legal issues.

A year or so went by after the ASCA conference.  I had done some reading but really hadn’t been aggressive in prepping for the test.  I then saw that AORN also offered an online prep course for CASC.  I always did some sort of conference/educational offering specific to ASCs each year, I thought I would sign up for it, taking away some new information as well as reinforcing some of the things that I had learned along the way.

Taking the Leap to Administrator

Shortly after the AORN prep course, the unexpected happened; my center’s administrator took an unplanned leave of absence.   I began putting out fires as they came along, having no real choice.  A two month leave of absence eventually turned into a permanent resignation.  There would be no opportunity for any sort of transition for our center.  Fortunately, our staff was comprised of some very strong and knowledgeable employees, many who have been there for years.  Their help was invaluable in keeping the center productive during this time.

At that point, I had a choice.  I could pursue gaining the knowledge needed to possibly become administrator (entirely dependent on the governing board having enough faith in me to do this) or staying with my current position as director of nursing and let the board look for a new administrator.  At this point, I had been director of nursing for three years. As I had been working long days for a couple of months already, trying to fill the shoes of both roles, I decided that if I was going to be in, I should be all in.  Fortunately, the board had enough faith in me to appoint me as administrator. Now I just had to figure out exactly what an administrator did.

As we had been functioning in reactive way for many months, we sat back and set goals and priorities.  Many things were working well and could continue functioning the same, some things needed updated or changed.   In a few short months, we updated the employee manual, cleaned out a huge storage unit that contained redundant paper records going back 15 years, updated the lobby and exterior building, and updated policies, many that had not been touched since the day the center opened. Less than a week after I became administrator, we had a AAAHC inspector show up for a random survey, something I didn’t realize could occur. The inspection (under the circumstances) went well and we learned a lot from it, which was great help preparing for our planned reaccreditation survey with AAAHC in June 2020, in the middle of a pandemic, no less.

After surviving the forced closure due to the pandemic in March of 2020, thoughts of taking the CASC test resurfaced.  We had gone through being closed other than emergent cases, re-opening, COVID testing all of our patients for 10 months, learning and becoming intimately familiar with terms such as PPP loans and HSA grants.  Did I want another professional challenge?  Apparently, I did.

Preparing for the CASC Exam

I decided to take yet another CASC preparation course (yes, my third course).  I opted to take the ASCA virtual course.  Though it lacked the in-person aspects that I enjoy, it did allow me to participate in the live sessions when my schedule at work allowed, watch those that I wasn’t able to make in person, but most importantly, play and replay parts of sessions that I felt were important.  I’ve definitely found over the years that for me personally, repetition is the key to my learning.  I’ve learned not to worry if I need to hear something multiple times to make it “stick” (possible, thanks to the evolution of technology). This time, I started to feel comfortable with the information being presented, even in my weaker areas.

I now felt ready to sign up for the CASC test.  I took the practice exam, which was helpful in guiding my studies as the test got closer, as well as giving me some reassurance that I was on the right track.  When I took the CASC exam, I had been an administrator for a year and a half.  I was happy to find out in May that I passed the exam on my first try.

I would encourage anyone preparing for the exam to try to become knowledgeable in all areas of the exam. Studying is super important, but it can’t take the place of hands-on experience.  I actually learned a lot by participating in comprehensive benchmarking studies as it forces you to find out information in all aspects of your center as well as preparing for reaccreditation.

I also learned that instead of being fearful of surveyors and inspectors, to try and extract as much helpful information from them.  Ask lots of questions and learn as much as you can to improve your processes, as well as pass inspections.  It might even help you answer a question or two on your CASC exam!

My road to CASC certification certainly wasn’t a linear one, but it was well worth it.

Follow This Guidance to be Better Prepared for an SSI

By Terri Mahoney, CASC Every month, your ASC likely receives its post-operative patient infection surveys back. Do you hold your breath as you scan the surveys

By Becky Ziegler-Otis, MHA, CASC, CPHQ, CHC, RHIA As an Ambulatory Surgery Center professional, you will undoubtedly be faced with preparing for a regulatory

Before, During, and After Cataract Surgery

By Stephanie Kirby, BSN RN CASC As a Single Specialty – Ophthalmology Ambulatory Surgery Center (ASC) you are used to a quick turnaround in patient care. You

Sign up to hear the latest news, and upcoming exam dates.